In year 1055 prince Břetislav I implemented a new Order of Succession, so called agnatic seniority. According to this order the reign in Bohemia should be passed on the oldest male member of the Přemyslid Dynasty. For younger members there were conferred principalities founded in Moravia (Moravian, of Olomouc and later also of Znojmo).

The Order of Succession of the agnatic seniority did not prove useful for a longer time and was broken several times. In one of these cases when the order was broken, it was the ascension of Soběslav I (1125 – 1140) to the throne of the Prague reigning prince.

In April 1125 Bohemian Prince Vladislav I dies, who shortly before his death settled the succession of his younger brother Soběslav, which was in contradiction with the then principles of the agnatic seniority. The oldest living member of the dynasty in that time was Soběslav’s cousin Otto II, called The Black, who governed the conferred Principality of Olomouc and who was known to claim open rights to the Prague throne.

In order to strengthen his power and position Soběslav made a campaign to Moravia in the autumn 1125 and revoked Otto’s reign in the conferred Principality of Brno. The banished Prince of Olomouc did not have enough own forces to strike back and therefore he asked German King Lothar III for help. The Roman Monarch being promised an easy victory supported Otto’s claims to the Bohemian Prince’s throne and in the winter at the turn of the years 1125 – 1126 he started a military campaign to Bohemia.

The Course of the Battle of Chlumec

The chronicle entries speak of the winter at the turn of the years 1125 – 1126 as of a particularly cruel one. The Roman king must have been aware of the difficulty of the winter campaign, but he believed Otto’s promises that the expedition would be short and would not meet any stronger resistance. Therefore, Lothar III did not collect an army which would be large enough, but only relied on the warriors from the Eastern half of Saxon Duchy.

The Bohemian Reigning Prince Soběslav found out about the German war plans in advance and therefore had enough time to organize the defence. He succeeded in getting all of the important local great noblemen to his side and in order to boost the battle morale of the Bohemian army, he also got important sacred relics, the purported banner of St. Vojtěch (Saint Adalbert of Prague) which he then had fastened to the spear of St. Wenceslaus.

On 16th February 1126 a great thaw set in. Lothar’s troops started to move and proceeded to the Bohemian territory. They went through the mountain Pass of Nakléř and through the mountains of Krušné hory, where there was an old trade trail, so called Serbian Trail. The melting snow made it more difficult for the German men-at-arms to move. Most of the riders were forced to dismount their horses and take off their armour so that they were able to continue in further advancement.

Lothar’s army spread into a long convoy whose front was made by the regiment led by Otto of Olomouc. Prince Soběslav was awaiting the enemy at the foothills of the fortified settlement of Chlumec.

The crucial battle took place on 18th February 1126. The Saxon troops, tired after a long march, did not have enough time to set a battle formation and did not have time to fight back the prepared Bohemian warriors. Otto of Olomouc died in this cruel fight.

German monarch Lothar III with the rest of his troops escaped on a nearby hill and waited. For him the situation became, from the military point of view, very unfavourable. His army was encircled from all sides by Bohemian fighters so the Roman king did not have any other choice but to go into a losing battle or to try to negotiate.

Prince Soběslav was forethoughtfully aware of the fact that a complete defeat of Lothar III would lead to a protracted war against the whole Empire, this, however, was not in his interest. He, therefore, offered Lothar peace with the proposal of the alliance. At the same time Soběslav had, from the Roman king, the Bohemian lands bestowed as a fiefdom, which was the confirmation of his title of the Bohemian reigning prince.

Victory of Soběslav I at the Battle of Chlumec led undoubtedly to the inner strengthening and stabilization of the Bohemian state. Soběslav’s main enemy Otto II of Olomouc died at the battle and for next 14 years an efficient monarch became the head of the Bohemian Principality. He also became a loyal ally of Roman king Lothar III.

In honour of his victory in the following years reigning prince Soběslav had the Rotunda of St. George built on Mount Říp. 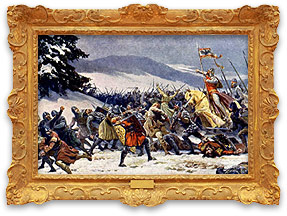 (*around 1190 – † 1140),
Bohemian prince who reigned in years 1125 – 1140. Soběslav was the youngest son of the first Bohemian king Vratislav I. After settling the disputes with his brother Vladislav I, he was short after his death in year 1125 elected to the prince throne. However, Otto II of Olomouc opposed militarily to Soběslav’s election, as he claimed his rights to the title of the reigning prince based on the rules of the Order of Succession.

In February 1126 Soběslav I defeated allied armies of Otto II of Olomouc and German king Lothar III at the Battle of Chlumec. Otto died in this cruel battle and the German king was captured. Soběslav forethoughtfully concluded peace with the German monarch and had the Bohemian principality bestowed as a fiefdom from him. For this gesture he also received the title of the elector with the right to vote German king.

In the internal politics he gradually took the reign away from the conferred Moravian princes, which led to forming of the opposition and conspiracy which Soběslav ordered to supress bloodily in the 1130s. Concerning the issues of the Empire he acted as a loyal ally of Lothar III and took part in several German campaigns on his side.

To celebrate his victory at the Battle of Chlumec Soběslav ordered to build Rotunda of St. George on Mount Říp. For his indisputable political skills which led to the internal strengthening of the Bohemian state Soběslav was the first monarch to whom the chroniclers awarded the title of Pater Patriae.

(*1075 – † 1137),
Saxon Duke, Roman King and in years 1133 – 1137 the Emperor of the Holy Roman Empire. He got involved in Bohemian history for the first time as the ally of Otto II of Olomouc in the dispute with Soběslav I over their claim to the Bohemian throne. After the lost Battle of Chlumec in 1126 he bestowed Soběslav with Bohemian Lands as a fiefdom and concluded with him an allied union. At the turn of the 1120s and 1130s he fought for the crown of the empire against the enemy Dynasty of Stauff.

In the following years he took part in several military campaigns to Italy where he tried to push through the sovereignty of the emperors over the popes.

(*1085 – † 1126 Chlumec) ,
Conferred reigning prince of Olomouc, grandson of the reigning prince Břetislav I and the cousin of Soběslav I. After Vladislav’s I death in year 1125 he claimed his right to the title of the Bohemian Prince based on the rules of the Order of Succession, because it was his Cousin Soběslav who was elected as the reigning prince. Otto, therefore, concluded an alliance with German king Lothar III and during the invasion to Bohemia he died in February 1126 at the Battle of Chlumec. 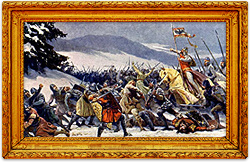 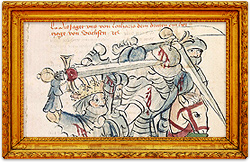