The Hussite revolution which in 1419 took over Bohemia and partially also other lands of the Bohemian Crown Lands was a result of the economic crisis and deep social contrasts. The Hus’s thoughts of the reformation of the church and the whole society found their followers mainly among Bohemian townspeople, knights and the poor.

Soon the Hussites in order to defend themselves against the outer (Catholic Church, Pope, King and later also Emperor Sigismund of Luxemburg and by them organized crusades) as well as the inner enemy (Catholic nobility, Church and their allies) collected a substantial redoubtable military power and well thought-out tactics of the fighting. Their enemies were not able to defeat the Hussites by power and that is why they started to negotiate (Basel 1433).

The revolutionary movement was getting weaker and weaker thanks to the general exhaustion of the country after fifteen years of fighting and also thanks to the arisen chaos. There were more inner disputes between the individual representatives and factions which put against each other the Moderate (mainly the nobility, Union of Prague) and the Radical utraquists (mainly the poor, the Taborits and the Sirotci, so called Orphans, and their field army). The former longed for the stabilization and peace, and did not mind if it was with a compromise agreement or even with the alliance with Sigismund of Luxemburg and the Catholics. In their way there were mainly the field armies who lived from the war.

The beginning of year 1434 was not favourable to the radicals. Their armies led by the Taborits were without any success trying to conquer Catholic Pilsen since the summer of the preceding year. Frustration and failure brought a lot of discords among them during which even Prokop the Great, informal leader of Hussite Bohemia, himself was injured.

Many of them went over to the military camp of the Moderate, or disgusted by the course they withdrew into seclusion. In early May the radicals lost their last positions in Prague. The Moderate utraquists, who newly got help even from the Catholics, got an incredible opportunity to liquidate such a riven rival.

At the same time the radicals were aware of the fact that time is against them. All their attempts to solve the dispute failed and the in haste collected armies of both belligerents took their positions near a village of Lipany not far from Český Brod in the East of the current South Bohemian Region; brother against brother…

Course of the Battle of Lipany

Both armies standing against each other behind the barricades of wagons started the battle itself, as was the habit, with shooting from howitzers and other firearms. After some time it seemed that on the side of the coalition of the Moderate utraquists and the Union of lords there was some chaos which turned into pretended retreat.

The Taborits and Sirotci lacking a united lead let this simple trick by Diviš Bořek of Miletínek, the head hetman of the rivals, deceive them, left their barricade of wagons and started chasing them. It came to an open hand-to-hand combat in which the army of the Moderate could apply their partial superiority in numbers.

It was in this decisive moment when the abandoned radicals’ barricade of wagons was attacked by the cavarly of the Union of Lords and the fight turned into liquidation of the surrounded Taborits and Sirotci. The tragedy of the Battle of Lipany was completed by the flight of their cavalry led by Jan Čapek of Sány.

The battlefield near Lipany was after several hours of fighting covered in blood of roughly 1,500 killed, only 200 of them, however, belonged to the camp of the Moderate and the Union of Lords. Among 1,300 comrades-in-arms the death also found many of the leaders of the radicals, e.g. Prokop the Great, Prokop the Lesser or Sigismund of Vranov.

The Battle of Lipany completed the revolutionary stage of the Hussite movement and as a result it enabled the conclusion of the compromise agreement with the Catholic Church and the Emperor Sigismund of Luxemburg. He in exchange for the title of the Bohemian King signed the Compactata in Jihlava – a legal document negotiated in 1436 by the Hussites in Basel, Bohemian utraquists and their Church were officially given the right to independent existence.

Still long after that the situation in the land was really complicated. First the ascension to the throne of George of Poděbrady brought the Bohemian Kingdom back to the direction of stability and development. He himself, even though in 1434 only fourteen years old, belonged as a Moderate utraquist to the participants and winners of the Battle of Lipany. 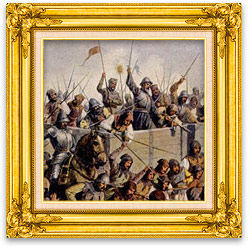 ( * probably 1380 – † Lipany 1434 ),
Hussite priest, politician and commander (in years 1426 – 34 leader of the Taborits). He came from a rich patriciate of Prague, as a young merchant he travelled around a large part of Europe, gained university education and became a priest. After the death of Jan Žižka he can be considered as a high representative of the Taborits to be the main political authority of the Bohemian Kingdom.

(*late 14th century – † 1452?),
hetman of the radical Hussites (in years 1431-34 commander-in-chief of the Sirotci). Rather contradictory personality of the Hussite wars, a great person regarding his personal courage, but also famous for his greediness, haughtiness, cruelty and rashness, which was the reason for several defeats. As the head of the Sirotce he led several Hussite raids to today’s Slovakia and Poland. Especially his campaign in order to help Poles in the war against the Order of German Knights, in which the Hussites reached the Baltic Sea, became famous. With the cavalry which he commanded in the Battle of LIipany, he fled from the battle field. Later he took part in Polish mercenary in fights in today’s Slovakia.

(? – † Lipany 1434),
Hussite priest and leader. The nickname “the Lesser”, or the diminutive “Prokůpek” were used to distinguish him from Prokop the Great. He was a loyal follower of Jan Žižka, after his death he gradually became the main spiritual protector of the Sirotci in whose campaigns he took part as the military leader. This was also the case in the Battle of Lipany in which he died of the wounds.

(? – † Lipany 1434),
Hetman of the radical Hussites. We know only a little information about him. In the Battle of Lipany he most probably commanded the field army from Tábor (ca. 6,000 men), which built there the main part of the radicals’ army, he also died there.

(? – † 1446),
Hetman of the radical Hussites. We know only a little information about him. In the Battle of Lipany he was most probably the chief hetman of the Taborts and he fled together with the cavalry led by Jan Čapek of Sány. Later he was captured and killed in small local wars.

(? – † 1438),
Hetman of the Moderate Hussites. Originally a poor yeoman from Eastern Bohemia. He started as a radical follower of the Orebits, soon after he, however, went over to the service of the Moderate of Union of Prague. Leading them he in 1434 in the Battle of Lipany defeated the core of the radical Hussite field armies. Thanks to his contributions he towards the end of his life gained substantial power and he became the richest nobleman in Eastern Bohemia. 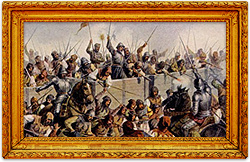 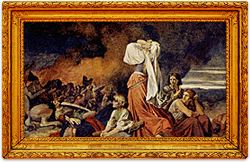 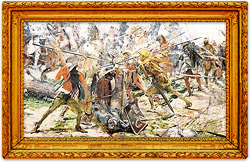